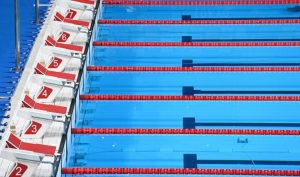 Swimming will set up an ‘open category’ to allow transgender athletes to compete as part of a new policy which will effectively ban them from women’s races.

“I do not want any athlete to be told they cannot compete at the highest level,” Husain Al-Musallam, president of governing body FINA, told an extraordinary congress of his organisation.

“I understand why transgender athletes want to compete in the gender of their choice…but we should not favour one athlete over another.”

“I will set up a working group that will establish an open category at some of out biggest events. We will be the first international federation to start this work.”

He was speaking as FINA unveiled a policy on inclusivity which was then approved by the members.

The policy received a cautious welcome from American swimmer Alex Walsh after she won the women’s 200m medley at the world championships later Sunday evening.

“I’m happy that FINA are… re-evaluating the rules,” she said.

“I am not really sure what the answer is to keep things fair but obviously I hope that everyone is able to compete and as long as they are finding a way to do that then I am happy.”

Brent Nowicki, FINA’s CEO, said the organisation was determined “to maintain the separation of aquatic sports into men’s and women’s categories.”

He added that “FINA recognises that … this policy means certain individuals may not be able to compete in the category that best aligns with their legal gender, gender identity or gender expression.”

Blow for Team SA as medal prospects pull out of Commonwealth Games.

SPRINGBOK WOMEN TO HOST SPAIN IN TWO TESTS IN AUGUST

Bok coach has faith in captain Pollard, explains Kolisi’s absence: ‘A plan we want to execute’