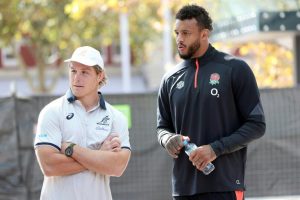 Australia captain Michael Hooper said Friday that his team were steeling themselves to break a jinx against England, as the under-pressure visitors braced for an ambush in the opening Test in Perth.

The Wallabies have lost their last eight Tests against their bitter rivals since former Australia coach Eddie Jones took charge of England after the 2015 World Cup, including a 3-0 series whitewash six years ago.

But the hosts are favourites for the three-match series, which starts on Saturday, with England’s struggles this year heightening the pressure on Jones, who has admitted he is under the gun ahead of next year’s rugby World Cup in France.

The match is a golden opportunity for the new-look Wallabies, who have sprung selection surprises with lock Cadeyrn Neville and hooker David Porecki awarded debuts, to end their barren run and draw first blood.

“It’s a motivation to turn the ledger and we have three games at home,” Hooper told reporters in Perth.

Blow for Team SA as medal prospects pull out of Commonwealth Games.

SPRINGBOK WOMEN TO HOST SPAIN IN TWO TESTS IN AUGUST

Bok coach has faith in captain Pollard, explains Kolisi’s absence: ‘A plan we want to execute’