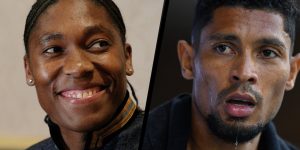 The Tokyo Olympics are less than 100 days away, and Covid-19 has slowed the preparations for South Africa’s hopefuls at the quadrennial showpiece. They were granted a chance to really push themselves at the national championships over the past week.

A week on from Swimming South Africa holding its national championships behind closed doors, Athletics South Africa followed suit in Tshwane this weekend. Star athletes such as Wayde van Niekerk, Caster Semenya and Akani Simbine showcased their skills during the event.

Van Niekerk is continuing his comeback after returning from a potentially career-ending injury. There were fears that the 400m Olympic champion and world record holder would not be present at the University of Pretoria event. He was scheduled to travel to the US to begin his training for the Tokyo Games, but hiccups with his visa and some Covid-19 restrictions put off his departure.

He skipped the 400m race, won by KwaZulu-Natal’s Zakithi Nene in 45.54 seconds. Deline Mpiti conquered the women’s version in 52.78 seconds

On the advice of his coaching team, Van Niekerk has forgone competing in his favourite distance for now, only competing in 100m and 200m races as he continues to recover from a knee injury that almost shattered his career.

“Today (Saturday) was good. It was quite cold, so the first 100 I was just feeling where I am physically. As I came out of the bend, I felt comfortable, I felt strong enough to finish the race. I wasn’t really trying to push for anything or any time or anything. Just to execute the race and get the win,” said the fastest human over one lap after his victory.

“It’s been a bit of a rough last few months. I’ve not been sure exactly when I’ll be travelling over and what’s happening next. I haven’t had any flights or anything confirmed so I’m hoping that next week I get something concrete as to when I’m travelling to the US.”

On whether he’ll attempt to qualify for both the 200m and 400m races in Tokyo, Van Niekerk hinted that it was unlikely. He did it once before, at the 2017 world championships, returning with silver and gold in the respective distances. But that was before the injury.

The double Olympic 800m champion was also competing in another distance, the 5,000m. On her way to victory in the race, she recorded a personal best time of 15:52.28. However, the time was more than 40 seconds off the benchmark for Olympic qualification in the event.

Semenya will still take solace from her improvement in the distance she has adopted since a World Athletics eligibility ruling came into effect which prevents female athletes with differing sex characteristics from competing in events from 400m to 1600m, unless they reduce their testosterone levels.

Semenya is appealing against the regulations at the European Court of Human Rights.

“We’re happy with what we’re doing, we’re having fun. At training each and every day we don’t stress‚” she said after her victory.

“We’re planning to try to get a few races in Europe and just try to have fun. Now is all about having fun. We’ve achieved everything that we wanted‚ all the major titles‚ inspiring the youth‚”

The 30-year-old has until 29 June, the deadline for all athletes, to try for an Olympic qualifying time.

In the 100m race, Akani Simbine claimed the national crown with a sub-10-second time of 9.99 seconds. In the semi-finals, the Olympian ran a national record time of 9.82 seconds. However, due to an illegal tailwind, the time was not recognised.

Reabetse Moloi was crowned the new 100m women’s champion, while in the longer distances, Glenrose Xaba successfully defended her national title in the women’s 10,000m final in 33:35.23, while Precious Mashele ripped the field apart to win the men’s 5,000m final in 13:42.31.

Le Roux Hamman claimed the men’s 400m hurdles title with a time of 49.70 with fellow Olympian Wenda Nel taking the women’s version in 55.60, just missing out on setting a qualifying time for Tokyo.

“I want to make the most of every racing opportunity, but hurdling is unpredictable. You can run the perfect race. It also takes only one mistake to miss out on one’s goal. I think I might have been slightly over eager. After the ninth hurdle, I decided to shorten my strides, thinking it will enable me to ‘attack’ the last hurdle. In hindsight, I should not have done so,” said Nel.

In the men’s shot put, Kyle Blignaut and Jason van Rooyen continued their domestic rivalry in a hard-fought battle. Blignaut ultimately came out on top to win the final with a 20.82m heave, with Van Rooyen settling for the runner-up spot (20.60m). DM

For more  on the story,  visit Daily Maverick
SHARE THIS

Over 50! All The Confirmed DStv Prem Signings So Far.

Kolisi to lead Boks on Saturday after recovering from COVID-19