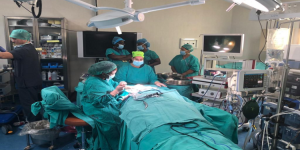 The NHI Bill was approved by Cabinet in July and has been tabled before Parliament.

The governing ANC initiated the idea of the NHI in 2007 saying it wanted to broaden access to medical treatment in a country where at least 72% of the population relies on a public system with too few doctors and dilapidated facilities.

Dr Crisp says government wants to have a single system that everyone can participate in.

“We have an extremely inequitable health care system in South Africa. We have a completely parallel system, where the private sector and the public sector function as if they’re in different countries and we have a huge amount of resources that we haven’t managed to harness. We want to have one system, where we will all participate, and we get the help because we need the healthcare, not because we’ve got money to pay for it, or we’ve got influence in the system.”

For more info visit the SABCNEWS