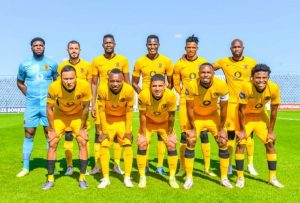 In a statement, the Club revealed that at the height of the outbreak they recorded 52 positive cases, resulting in their club premises in Naturena being closed.

Kaizer Chiefs on Tuesday announced that they will appeal the decision of the Premier Soccer League (PSL), who declined their request to have their December DStv Premiership fixtures called off due to Covid-19 infections.

In a statement, the Club revealed that at the height of the outbreak they recorded 52 positive cases.

Outlining how their request came about, Chiefs asked for their games to be called off after initially recording 31 positive results in both the playing squad and technical team at the beginning of December.

Following subsequent testing over the following days, a total of 52 cases was recorded as they shut down their headquarters in Naturena.

During that time the club forfeited the Premiership fixtures against Cape Town City (4 December) and Golden Arrows (8 December) as they argued they didn’t have enough players to honor the games.

Expanding on their appeal, Chiefs say they are, “disappointed and taken aback by the contrasting lack of urgency from the PSL after having taken almost three weeks to address the matter. The reason might be that the League did not have a Chief Medical Officer who could have advised those dealing with the issue from an NICD and Department of Health protocols perspective”.

They have also revealed that a Chief Medical Officer was only appointed last week as a result of their submission on the Covid outbreak.

The Glamour Boys have also added that they would not have benefited from games being postponed.

They also argue their hard-line stance shows their, “commitment and value of the lives of their players, staff, their families, supporters and the country at large”.

“We continue to operate in a safe environment to mitigate danger to people’s health. It must be noted that Kaizer Chiefs has never in the past, nor ever will, take to the field with positive Covid cases, which is contrary to other members who have publicly pronounced that they have played with positive cases in the camp.

We are living through a pandemic that is with us for the foreseeable future or until a cure is found and we call for responsible behaviour from everybody to try to limit its effects. In this specific case, we urge the governing structures of football to deal with the situation in a manner that is warranted by these extraordinary circumstances.”

On Monday, the League’s Executive Committee backed their Football Department’s decision to decline Chiefs’ request as they found the Club had, “among other things Kaizer Chiefs were asked to demonstrate, why: despite NSL Circulars no 12 of 2020; 24 of 2020; and 11 of 2021; exceptional circumstances existed to postpone all Kaizer Chiefs matches for the month of December in this instance”.