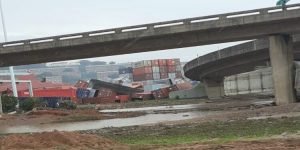 A view of collapsed containers destroyed by the heavy rains and flooding, across from the old airport south of Durban, April 13, 2022.

Twelve people have been arrested after two retail outlets were broken into and looted on Wednesday night at Umlazi township J section south of Durban.

This incident follows another looting incident that was reported south of Durban on Monday where some communities were allegedly helping themselves to containers that were washed away by floods.

Police spokesperson Nqobile Gwala says the 12 suspects are arrested for charges of business burglary and possession of stolen property.

Gwala says they will appear at the Umlazi Magistrate’s Court on Thursday.

“Last night (Wednesday) at 21:00, a group of community members entered two business premises at Umlazi H and J Section and they took groceries and appliances. Police swiftly responded at both premises and arrested a total of 12 suspects. The suspects were arrested for charges of burglary business and possession of stolen property. Some of the stolen groceries were recovered by police and handed back to the store manager. A vehicle that was used in the commission of a crime was also seized by police.”

For more details on the story, visit the SABCNEWS