The ANC said it would further discipline Ace Magashule if he did not apologise for trying to retaliate against Cyril Ramaphosa for his suspension.

All charged leaders of the governing party had to step aside from their positions due to court cases relating to fraud, corruption and money laundering.

The embattled Secretary-General refused to step aside and was thus summarily suspended by the party’s highest decision-making body between conferences the National Executive Committee (NEC).

Mabuza attorneys have sent a letter to the Gauteng High court seeking an order for the step aside resolution to be declared unconditional.

Below are court papers challenging the step-aside resolution: 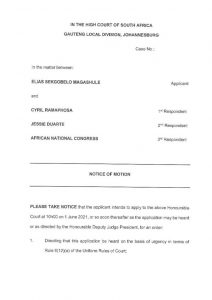 For more info on the story, visit SABCNEWS