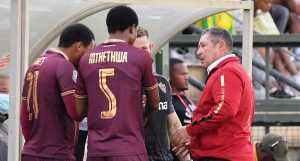 Johannes, 35, who joined the club in 2019 and donned the captain’s armband since his arrival from Bidvest Wits, will be released upon the expiry of his contract on Thursday.

Scott and van Heerden, both 34 years old, will also follow after their contracts were not renewed, while 31-year-old Mthethwa ends a four-year stay in the Cape Winelands.

Meanwhile, Sinkala, who joined just two-and-a-half years ago from DR Congo giants TP Mazembe, and Dimgba, who joined from Nigerian outfit Enyimba two years ago, have also been let go of to clear up foreign spaces in the squad.

Isaacs departs for a second time after he was released to join Cape Town All Stars last season before returning on a short-term deal at the start of the 2021/22 campaign, though he managed just one goal in 20 appearances and failed to replicate his form from the club’s debut season in the top flight.

As earlier revealed by SABC Sport, coach Steve Barker will have three new players to choose from next season, with Vusi Sibiya, Mthobisi Mngomezulu and Sihle Nduli set to join from Baroka and TS Galaxy respectively.