The group launched its North West branch in Rustenburg on Wednesday just weeks after KwaZulu-Natal. 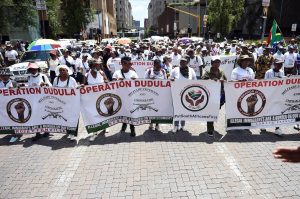 Controversial movement Operation Dudula has vowed to entrench its anti-migrant ideology and establish structures across the country.

The group launched its North West branch in Rustenburg on Wednesday, just weeks after doing so in KwaZulu-Natal.

They continue to raise concerns about stirring xenophobic sentiment in the country as they accuse foreign nationals of peddling drugs and contributing to the high unemployment rate.

But they said they were just helping government to enforce its own laws, which includes expelling illegal immigrants.

Backed by other members of the national leadership such as Nhlanhla Lux Mohlauli, Operation Dudula’s deputy chair Dan Radebe has tasked the interim branch leadership in Rustenburg to establish sub-branches in the region and also plan to launch in other towns across the North West.

“We will come and join and assist them within the ambits of the law because we’ve got laws that need to be protected,” Radebe said.

A motorist who had been hooting in support of the march said that he subscribed to Dudula’s ideology.

“It’s our economy, we are stopping illegal immigrants,” he said.

Giving its message of support, groups like the All Truck Drivers Forum and Allied South Africa said that it wanted Dudula to address the employment of foreign nationals in the trucking industry.