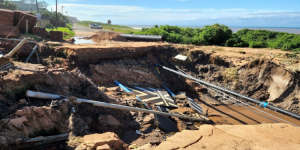 Roads destroyed by heavy rains in La Mercy in KwaZulu-Natal.

Mop-up operations have been intensified in KwaZulu-Natal after devastating floods struck the province twice in just over a month.

Premier Sihle Zikalala says the heavy rains which hit the province and caused flooding at the weekend have left hundreds of residents homeless.

He says the La Mercy bridge in the north of Durban has effectively been cut off after the collapse of parts of the road linking the area to the N2.

Zikalala was briefing the media at uMldoti in Durban together with a number of MECs on Monday after assessing the extent of the damage.

He says, “We have seen the damage is huge. The first is infrastructure on roads. The M4 which was already closed due to the fact the previous floods affected the roads between Lamesi and Sitha, it is impossible for people to use that road.”

More details on the SABCNEWS

Life in jail for man who butchered his girlfriend, and drove around Limpopo dumping her body parts

My rights were fundamentally violated: Ndlozi