Judgment is expected to be handed down on Friday, in the case against a former police sergeant accused of murdering six of her relatives to cash in on their insurance policies worth over R 1.4 million. 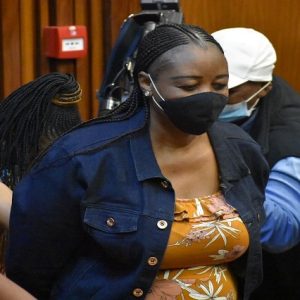 The High Court, sitting at the Palm Ridge Magistrate’s Court in Johannesburg, is due to rule on the charges against Nomia Rosemary Ndlovu.

Ndlovu is charged with murder and fraud.

The 46-year old has pleaded not guilty to all the charges. She is accused of being involved in the deaths of her lover, her sister, her niece and nephews and a cousin, over a period of six years.

She was nabbed in a police sting when she attempted to allegedly arrange a hit on her sister and five children in Bushbuckridge in Mpumalanga with the aim of claiming an insurance payout in 2018.

Last week, the state requested a guilty verdict against multiple murder accused. Presenting a closing argument, the state sought to highlight the pattern in Ndlovu’s conduct in relation to the murders she is accused of to show that she had indeed registered failed members on insurance policies and later masterminded their murder in order for her to cash in on the policies.

The state accused Ndlovu of having “lied about her relationship with her cousin Madala Homu” whom she registered as “spouse on policy documents” in order to avoid having to pay premiums for him.

Last month, Ndlovu  denied tampering with evidence when she visited her sister, Audrey’s room in Tembisa after she was found dead. Audrey was found poisoned and strangled to death in her rented room in June 2013.

She denied this. “About the issue of the cup. I deny that I took the cups to wash them at the tap outside. I deny that.”

Ndlovu said when she was in Audrey’s room she leaned back against a cupboard, the cups fell and she took them and picked them up and put them in a bucket.