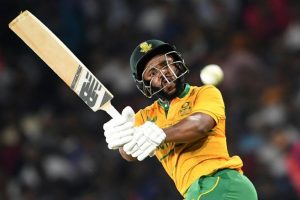 South Africa white-ball skipper and Test vice-captain Temba Bavuma has been ruled out of their tour of England which starts next month, Cricket South Africa said on Wednesday.

Bavuma suffered an elbow injury during a recent Twenty20 series in India and needs eight weeks to recover.

South Africa have included Essex off-spinner Simon Harmer in their Test squad after he and Maharaj were the match-winners in a series against Bangladesh last season.