Addressing the crowd, Economic Freedom Fighters (EFF) leader Julius Malema told residents that they wanted to change things in Stellenbosch for the better. 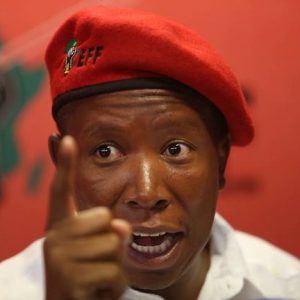 Promises of quality housing and decent basic services for the poor and marginalised are only a few of the promises that Economic Freedom Fighters (EFF) leader Julius Malema has made to residents in a Stellenbosch township.

Malema kicked off his three-day electioneering in the Western Cape with a visit to Kayamandi in Stellenbosch.

He was almost two hours late but the crowd remained, eager to hear what the leader of the red berets had to say.

Addressing the crowd, Malema told residents that they wanted to change things in Stellenbosch for the better.

“Stellenbosch is a racist town and we want to change it. Whether you are white, coloured, Indian or African, the EFF wants people to stay together as one.”

He promised residents that the EFF would prioritise adequate housing.

Malema also told residents that his party was aware of the challenges of electricity in informal settlements.

“We mus not wait for houses to get electricity, they can put electricity in each and every shack.”

He has urged residents to vote for the EFF on 1 November, telling the crowd that other political parties had failed them.

“Kayamandi is the home of the EFF. There is no other party that will take Kayamandi except the EFF,” Malema said.

Some Kayamandi residents in Stellenbosch said that they were willing to give the EFF a try, claiming that they had been failed by other political parties.

Many residents were impressed with what they heard from Malema and said that they would vote EFF on 1 November.

Another resident was honest – she’s not registered to vote and admitted to just having come out on the day to see Malema.

Malema’s next stop will be in Nyanga and Khayelitsha on Friday.

He will also address university students at CPUT’s Bellville campus.