A man walking near a railway line in Boiketlong, just outside of Sebokeng, made the gruesome discovery of a decomposed body buried in a shallow grave on Monday. 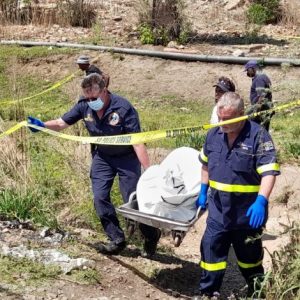 Police Spokesperson, Shaan Motsapi said that they received a tip-off about the corpse on Monday at around 21:00 and went to investigate. Police made a shocking finding of a severely decomposed body of an unknown man who was buried in a shallow grave.

The body was dug out on Tuesday morning.

The discovery was made by a passer-by after he saw a hand sticking out from a shallow grave. The man, who refused to be named fearing to be a witness at the Magistrates Court, said the deceased was wearing double clothes that included a grey jacket and two trousers. It is alleged that the recent rains had swept away part of the soil that used to cover the shallow grave wherein his body was buried.

Residents from the nearby Boiketlong area pointed out that the man could have been killed by cable thieves, which he is suspected to be part of, in a deal that went wrong. The residents said that since trains stopped running, cable thieves have been encroaching on their area. Other community members fear that the body is that of a local concerned residents’ activist who disappeared some years back.

Police have opened an inquest docket.