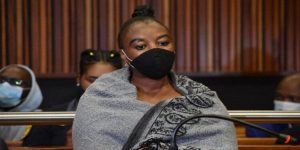 Convicted killer and former police officer Nomia Ndlovu is seen in pictured in the Palm Ridge Magistrate’s Court on 22 October 2021.

Convicted killer and former police officer, Rosemary Nomia Ndlovu, is on Wednesday morning expected to be back in court where she will face charges for plotting to murder two police officers.

Ndlovu will appear at the Kempton Park Magistrate’s Court.

The charges she currently faces include plotting the murder of Sergeant Benneth Mabunda and Colonel Nthipe Boloka.

Mabunda was the investigating officer in Ndlovu’s case while Boloka was the station commander at the police station where she worked.

For more info on the story, visit the SABCNEWS