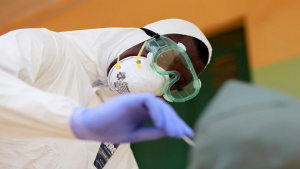 A medical worker takes a sample for COVID-19 during a community testing.

Health Minister, Joe Phaahla says South Africa is in the fourth wave of the coronavirus with all provinces recording infections.

Briefing the media on Friday morning, Phaahla says the recovery rate from the variant is still high.

Phaahla says the Omicron variant has been reported in 70 countries.

A further 36 COVID-19 related deaths have been reported, bringing total fatalities to 90 262 to date.

According to the NICD, the breakdown of provincial cases shows KwaZulu-Natal and Western Cape quickly catching up to Gauteng with positive infections.