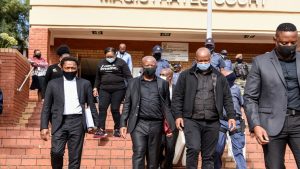 Lobby group AfriForum’s witness, trauma counsellor and pastor, Hendrik Human, will continue to testify in the High Court in Johannesburg in the “Kill the Boer” matter between the lobby group and the Economic Freedom Fighters (EFF).

AfriForum is taking the EFF, Julius Malema and Mbuyiseni Ndlozi to court over alleged hate speech for singing ‘kill the boer’ during the Brendon Horner murder trial in Senekal.

AfriForum is asking the High Court to declare the song hate speech.

It is also calling on the court to impose a sanction on  Malema, Ndlozi and the EFF for singing the song.

It argues that Malema and Ndlozi are guilty of inciting violence by singing the song.

The EFF has rubbished the legal action by AfriForum and says it is a waste of the court’s time.

For more info, visit the SABCNEWS