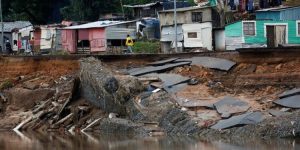 A man walks on a destroyed road after flooding in Umlazi near Durban.

The Democratic Alliance (DA) says while it welcomes assistance by the national government to communities in KwaZulu-Natal and the Eastern Cape devastated by last week’s floods, it will closely monitor any abuse of relief funds, particularly by the KZN provincial government.

President Cyril Ramaphosa declared a National State of Disaster on Monday night in order for the government to effectively harness resources and capacity to deal with the devastation of roads, infrastructure, homes, and schools.

DA’s National Spokesperson Cilliers Brink says, “We will be making specific proposals to the Speaker of the National Assembly on how to strengthen the oversight powers of parliament and prevent the abuse of power and public money under the National State of Disaster…”

“We are particularly concerned about the situation in KZN where it is clear that the provincial government is not managing the situation properly and we have had reports of widespread abuse by ANC councillors of disaster relief resources such as commandeering water tankers and so forth and national government must make sure that those abuses do not take place under its watch,” added Brink.

For more info on the news, visit the SABCNEWS