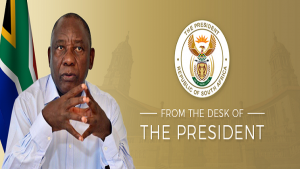 It follows disruptions at May Day Commemorations in the North West which resulted in Ramaphosa being escorted out of the Royal Bafokeng Stadium.

“This year, I was invited to address a Workers Day rally at the Royal Bafokeng Stadium in Rustenburg. I was, however, unable to address the gathering because workers there had grievances that they expressed loudly and clearly. While the main grievance appeared to be about wage negotiations at nearby mines, the workers’ actions demonstrated a broader level of discontent. It reflects a weakening of trust in their union and Federation as well as political leadership, including public institutions,” says Ramaphosa in his weekly letter.

For more details, visit the SABCENEWS