What happens when three musical geniuses get together during lockdown? They make music of course!

Joburg’s trio Mpho Kodisang, Mondli ‘Smondlan’ Masilela and Tsholo Papo who have been in the music industry for a while got together to create Mezzo_ZA. And the new kid on the South African music block is about to dish up what was cooking during lockdown. 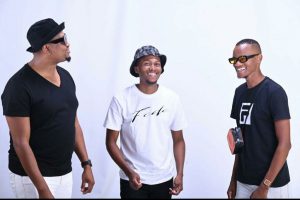 Mpho explained the reason behind the conception of Mezzo_ZA, “We analysed the amapiano society and saw a huge gap between amapiano and afro-soul. The amapiano beat is loud, dramatic and too energetic. What if there was a softer/medium soulful amapiano sound? So Mezzo_ZA was birthed.”

Now, what exactly does the name mean? Mpho explains, “Mezzo is an Italian music term describing the intensity or loudness of a melody. It is used to mean somewhat, half, or medium. So, Mezzo_ZA is all about somewhat between amapiano and afro-soul.”

Mpho is a prominent session musician, gifted pianist and music producer who’s mostly seen on stage with the likes of Ringo Madlingozi and Tshepo Tshola to count a few. He has contributed to several Theatre Productions which include; Songs from Jazz Town, Talk to me, Tribute to Maya Angelou, Paradise Blue and others. He is a versatile producer who has produced the likes of Athari (Jazz), Vusi Gcabashe (Gospel), Nosisi Mavela (Jazz) and DJ Skopas (Mapiano) just to mention a few. Mezzo_ZA ‘Unlocking’ is his latest project. He’s not only the producer but the beat maker as well.

The EP consists of four easy on the ear tracks, all penned and sung by Mondli. Mezzo_ZA’s music is fresh, distinct and upbeat.

According to Smondlan, the EP was aptly titled ‘Unlocking’ because it’s an introduction to a new sound. He adds, “As you know, Amapiano sound is growing and evolving each and every day. We’re also ‘unlocking’ Mezzo_Za and we are coming out of our comfort zones.”

ANOTHER NOMINEE IN THE MAMA2022

New kid on the block to rep Africa at Nickelodeon