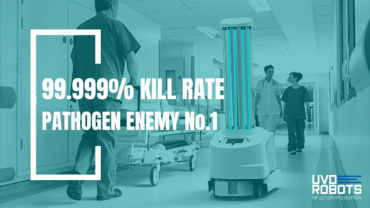 The spread of Covid-19 has spurred a swift response in most sectors. With tech leading the charge in a lot of instances with apps, new types of facemasks and social distancing mechanisms to name a few.

One type of product that we are seeing gaining more traction is the use of robots using UV light to disinfect spaces. In this unfamiliar territory we find ourselves waiting for a vaccine to be created and approved, robots could play a significant role in fighting the coronavirus pandemic and many other airborne viruses and bacteria in the health sector.

With parts of the economy being reopened, more people returning to work and schools being reopened, there has never been a better time to consider the use of UV-D disinfection robots, with the use of its short-wavelength ultraviolet (UV-C) lamps that can disinfect theatre units, and rooms in general in just eight minutes.

The UV-D robot uses eight full-length UV-C lamps with 360° coverage, which operate only in the germicidal wavelength of 253.7 nm. Each lamp generates 5J a second of UV-C energy. There is always a minimum of four lamps facing any given surface within 1m, totaling a minimal intensity of 20 J/m2 per second.

The UV-D robot also comes with three-dimensional (3D) cameras and proprietary software to carry out its disinfection. It can also freely reposition its UV-C emitter mounted on top of the robot platform within a defined area to negate shadowing and closeness to a surface. The repositioning can be repeated in ensuring the maximum UV-C intensity is radiated onto all surfaces and cubic metres of air.

The UV-D robot has a significant presence abroad and was brought to Africa in late last year to help fight the rapid spread of viruses in already overburdened facilities. This has made the UV-D robot a vital tool for hospitals and clinics in third world countries with already strained healthcare systems.

“The UV-D robot is very effective in destroying microorganisms by destroying their nucleic acid and disrupting their deoxyribonucleic acid (DNA) and leaving them unable to perform critical cellular functions. It does this in rapid time with sufficient power to generate between a log 3- and log 6-reduction, depending on the exposure time.

“This creates a near-sterile environment, which could otherwise not be achieved with manual interventions. There are only so many places a human or a cleaning instrument can reach in a typical eight to ten-minute cleaning regime.” Said Jonathan Burger, Nexmed Healthcare Solutions CEO.

The UV-D robot operates in a way that it can enter a room autonomously and destroy the virus on surfaces and air before a person enters. It is able to move less than 1 m from surfaces to ensure most of the contents in the room that come into contact with UV-C are disinfected. Cleaning the robot is also hassle free and only requires a wipe-down with a high-level disinfection solution.

The UV-D robot is highly recommended as it does not clean, sanitize but disinfects. Cleaning is the process of removing visible debris, dirt, and dust. While sanitizing reduces, not kills, the number, and growth of bacteria, viruses, and fungi. And the act of disinfection kills microscopic organisms (germs, viruses, fungi) on surfaces and in the air up to 99.99%.

Burger also added that with level 3 lockdown now in place and many industries returning to work the robot becomes an ally as it is able to disinfect in rapid time, multiple times a week up to 99.999%, leaving the facility aseptic and removing all harmful pathogens. Unlike alternatives like fogging, it requires no harmful chemicals which create health risks due to long term exposure. It also requires no human labour or lengthy disinfection cycles.

“It is also safe to enter the room immediately after disinfection where most fogging agents require at least 2-6 hours of ventilation time before a person can re-enter, which is disruptive to business.  We are seeing international use of the UV-D Robot across industries like hospitals, doctor’s rooms, and clinics, airports, hotels, schools, gyms, shopping centres, retail stores, banks, offices, and more.” Added Burger.

The UV-D robot currently works with a programmed map and it carries out the disinfection autonomously. But it does require a person to confirm that the area is safe to carry out the disinfection via a pre-inspection checklist built into the tablet. The robot allows up to 10 devices to be operated by a single individual.

Take a look at how it works:

Theatre8concept from Simon Ellison on Vimeo.

The UV-D robot has also won many prestigious awards in recent years.

Manufactured by UV-D Robots in Denmark and sold exclusively by Nexmed Healthcare Solutions in Sub-Saharan Africa. Since its inception, it has been highly recommended by clinics and hospitals and has gained a lot of exposure since the Covid-19 outbreak. For many individuals. The UV-D robot brings a sense of relief to many all over the world with its ability to disinfect rooms at such a rapid pace.

The GoBe Robot, the world’s newest and most advanced telepresence robot launches in 28 days and will be available in Africa via Nexmed. This will allow healthcare workers to interact directly with patients without physically being there and without the risk of being infected. We have already seen global shortages of PPE (Masks, Gloves etc.) Allowing doctors and nurses to consult with patients virtually negates the need to wear these items and thus save money and PPE in the long run.

New innovations such as these are bolstering the fight against Covid-19 and will definitely be around long after as the world wises up to all the ways technology can safeguard against so many things that the eye cannot even see.